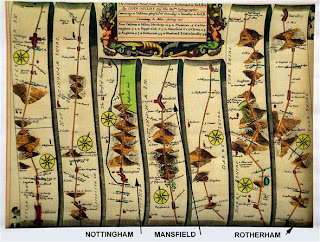 Made by a gentleman by the name of John Ogilby who was apparently a Scottish translator and "impresario", and who according to the maps themeselves became 'His Ma.ties Cosmographer' or what we would now call a cartographer, the maps are in the form of an unravelling scroll with a linear journey along the designated road.

And they have wonderful details, such as 'bad road', and 'Stone bridge 2 arches & Brook', and an unmistakable diagram outside some towns with the word 'Gallowes' beside it. *shudder*

(And yes, I am pressing on apace with the second book in the Witherstone trilogy, The Hunt Begins...)
Posted by J A Brunning at 09:53