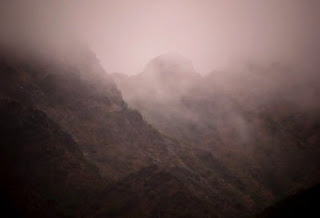 
The wiry grass glittered with diamonds in the clear crystal light. The hollow of her footsteps amplified the silence as she climbed, and she looked up the hill to where the green grass clung to the luminescent body of the rock, poised in its reach. The wind whispered around her, and breathed the new-born smell of heliotrope onto her skin. She inhaled its breath, her heart lifting, and trod the echo of her boots into the earth.

An exposed hawthorn stood silently, clasping the rock above her, where the skin of turf was thinning. She stopped for a moment, and a coil of air exhaled a breath of decay from the ground at her feet. A tangled scrap of wool and tiny bones lay rotting in the early morning sun. The heap stirred, the wind in its wool, mingling its dusky air with her breath. She turned away and carried on up the slope. As she neared the hawthorn, the silence was startled by the song of a blackbird pouring its golden enchantment through the air from the bony web of thorn, shimmering with endless points of light. The bird paused and looked back at her for a moment before continuing its clear, thrilling rapture. As she resumed her journey, the sparkling song washed over her, and her heart beat its tune.

As she climbed steadily higher, the wind’s murmur was becoming cooler, and the clear blue air was beginning to dissolve into a grey mist, gradually thickening around her as the hill became steeper. The grass was thinning, finally giving way completely to cold stone as the barren rock emerged beneath her feet. She stopped and turned, leaning her back against the cool granite, and felt herself alone on the hill.
Time was getting on. She turned back to the rock and climbed, the only sound carried on the sigh of the wind was the resonance of her footsteps into the stone. Her body pressed into the hill as she sought for any relief on the rock to which she could cling, and the rock steadily lifted her higher into the darkening clouds beginning to mass over her. The wind was hurrying her now, swirling its cool insistence against her neck. She shivered, pulling her collar in tighter against it.
As she finally emerged from the lee of the hill, the wind’s urging suddenly became a roar, pulling her clothes out from her body, screaming her hair into its mouth. Her cry was dragged out of her mouth whu-uff, and behind her, the wind cried O God! to the sky.

Great swathes of rain began to move across the dismal clouds, a huge bolt of cloth slowly unravelling in the wind. A thousand beads of rain wept into her face. The torrent of water soaked through her clothes in seconds, immersing her skin, and her heart ached suddenly for the blackbird’s song, far behind her now, flowing endlessly from the shimmering branches of the past. For a moment she thought she could almost hear it, echoing through the air which surged and howled around her. She closed her eyes to keep the song within her as she leaned against the hill.

Clasping the pale granite, heart pounding with the rain, she spread her fingers wide, roots tapping into the rock. Shimmers of rain clung to eyelashes, and skin of wet stone. As the sky slowly darkened into night, scraps and tatters of cloth flapped wildly, before breaking free and whirling away into the roaring silence.
Posted by Reigh Belisama at 12:03