Woo! Seeing ma wee wurrds Writ Large in the side of public buildings in Preston - and later tonight in Lancaster - is really cool... 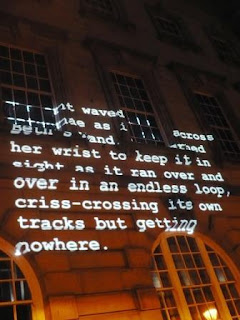 ...and finally makes it sink in that I'm about to be Published! In a Real Book!!! Woo hoo!!

I've made it into the Lancashire Writing Hub's first full publication - Word Soup: Year One - alongside such cracking Lancashire talent as...

Tom Fletcher (author of The Leaping), Sarah Hymas (Lancaster Poet), Nicholas Royle (published loads of novels including Antwerp, and runs his own printing press Nightjar), Rachel McGladdery (Poet and a super shiny star*), Norman Hadley (poet, author, and designer of enormous engines by night), Socrates Adams (award-winning blogger and writer whose emails never fail to calm stressful moments with his insistence that everythingisfine), Sandy Calico (blogger and writer of short fiction and super shiny star*), Peter Wild (writer and editor and co-author of 'Before The Rain', published by Flax), Mollie Baxter (writer and co-author of 'Before The Rain' who "finds that the act of writing is best approached by stealth"), and A J Duggan (author of Scars Beneath The Skin and, he tells me, a New Novel...!), and cool "Outsiders" photo-documentary dude Garry Cook.

The final choices for the successful authors in the publication was Jenn Ashworth's - author of A Kind of Intimacy - the kind of book that makes you look at your neighbours with a leetle more caution (though I'm more unsettled by the feeling that it isn't me who lives next to Annie, it's my neighbours...)

Check out the book launch at The Continental in Preston on Tooosday 22nd June - a Word Soup special!